The Jupiter Large Commercial Juice Press seems to tick all the right boxes when one is looking for the ideal juice press, or at least, as an effective one. An effective juice press is one that would need to be strong enough to stand the rigors of every day frequent use, fast and efficient, have a focus on quality, eliminating typical juice press problems like the bitter after-taste associated with fruit skin secretions, and finally, maximize the juice output from each fruit.

The Jupiter Large Commercial Juice Press is all of the above things and brings along some other benefits as well. Compact and stylish, it fits comfortably in a modern kitchen in a home setting and also has the robust capacity to handle a busy diner. It can be used to squeeze the juice out of a wide assortment of fruits, which include oranges, pears, apples, grapes, mango pulp, limes, lemons, and a great many more types. Its versatility makes it a greatly useful tool in a fruit health bar setting, as well.

Structurally, the Jupiter Large Commercial Juice Press is made of cast-iron and reinforced steel. A rubber-encased handle lets the user apply considerable pressure when using the juice press (up to 2,300 pounds per square inch), which is enhanced by a handle that is longer than similar products on the market, providing even greater leverage for the person manning the press, and making their work easier and significantly faster. The rubber-encased handle also makes it safe to use, preventing injury to the user’s fingers. The entire contraption sits on a heavy base that provides for greater stability while working the press. The cone and funnel are easily removable, and making washing by hand convenient, meaning hygiene is easy to maintain. They are made with stainless steel instead of the often un-safe option of aluminum, which sometimes gets eroded by the acidic nature of citrus fruits. It is also safe to wash these parts in a dish-washer, and it’s the size (about 8.5 by 7 by 15) make it a space-saving device for any busy kitchen.

The Jupiter Large Commercial Juice Press has been generally well-received by consumers, with one reviewer, D. Owen from Idaho, giving it a five-star rating and saying:

“I just received this juicer yesterday, but I am thoroughly impressed. The first thing I noticed was the heft of the package. This is a heavy piece of equipment. I bought it to replace a lightweight, $25 juicer that I had used for the past two years, but could not handle the strain. That juicer never did extract more than half of the juice from citrus. The Jupiter, however, leaves nothing but a bare husk of citrus rind. I was concerned about the footprint is too large, but it takes up only about 25% more table space than the old flimsy one. The suction cup feet are no problem. Make a space for it on the countertop, or in my case the kitchen food prep table. Don’t waste $25 on a lightweight juicer. Buy the Jupiter instead and give it a permanent home on your counter. You will be glad you did.”

The Jupiter Large Commercial Juice Press compared favorably with rival brands on the market, noticeably the Hamilton Beach, and is considered by users to be safe enough for even their children to manage to make it ideal in a domestic setting. Its ability to extract large quantities of juice in comparison to other brands has also been quoted by customers as a definite plus.

The fact that it is a non-electric device also counted favorably in its favor for the majority of customers. It does have a few noticeable short-falls, with some customers complaining it is difficult to move around. Other complaints included a need to hold it down while working the handle or lever, to prevent tilting. Some customers also seemed to have more success with lemons than with oranges, though this might be a problem with the application. 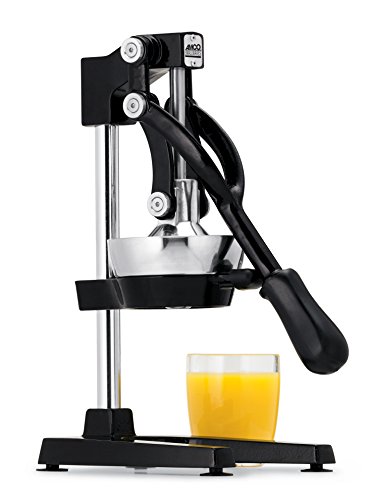